Home / Android Tips / How To Unlock A Locked Android Phone

How To Unlock A Locked Android Phone

How To Recover Lost Data In Android Latest Trick

How To Double Your Mobile Phone Battery Life

WHICH UNLOCK METHOD IS THE MOST SECURE FOR YOUR ANDROID?

Below are some methods to Lock and Unlock Android Devices, 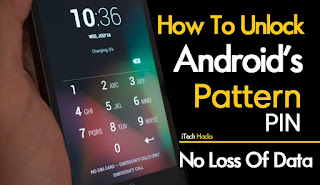 Facial recognition isn’t anything new. It first arrived on Android with the Ice Cream Sandwich version, also known as Android 4.0. This feature uses the front camera of the device to take a photo of your face and then it uses that photo as a baseline to unlock your device. It has a questionable level of security, with more cons than pros.

This is another method which is used in android devices how well it works depends on a few factors, like the quality of the sensor and its placement. Quality, in this case, means the speed that the sensor reads your finger. This varies a lot between devices, as well as its scratch-resistant surface. There are certain biometric authentication mechanisms which become faster the more you use them.

Like facial recognition, I’m still not convinced about using an iris scanner to unlock devices. It basically does the same thing as the fingerprint reader, and it requires the device to have a second, registered password in case you can’t get your phone unlocked. With the Galaxy S8 and Note 8, the fingerprint and iris scanners cannot be activated at the same time. In other words, the second unlock method needs to be a PIN or an alphanumeric password.

Smart Lock was introduced on Android 5.0 Lollipop, and it’s been updated throughout the latest versions. I don’t really see it as a method to unlock your device but rather as a compliment to the one that you’ve already chosen. What the Smart Lock does is very simple, it unlocks – or better said, keeps your device unlocked – according to where you are, your voice, a device or a presence.

A PIN is the traditional combination of numbers, and the length depends on which version of Android you have. It’s probably the main security option, distinct from the rest of the options presented here. PINs are also limited in their recovery if you happen to forget it. You’ll probably have to spend hours and hours trying to unlock your device. I use a PIN on my Android as a compliment to the fingerprint scanner.

The pattern, or design, is a unique feature on Android phones and it’s been around for a while now. You can use it combined with the PIN if you’d like, but it really is a decent security system by itself. There’s only a certain number of times that you can try it until it locks you out for few seconds. However, on some interfaces, a certain number of wrong attempts can lead the device to erase user data.
The iris scanner, Smart Lock and facial recognition are all complimentary or secondary security methods, and as of right now, they aren’t good enough to be used as the sole method of protecting your phone. This means that you’ll have to register a PIN, pattern or password as your primary option.
Share

While selling your Android device may seem like a no-brainer, there are actually quite a few …