How To Recover Lost Data In Android Latest Trick

How To Double Your Mobile Phone Battery Life

Android is now the most used mobile operating system in the world with many commentators putting its market share at around 80% With such growing presence there are too many Android applications in this post we are going to show you some android hacks, 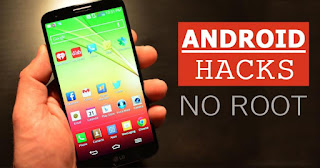 1.Get Update Before Releasing

Here are many people who use android and wait for Google Or Play store to release update of any Android However, the problem is that when the new Android system updates are released, mobile handset manufacturers have to readjust them in order to run on their handsets and now you can get updated by root your android phone so whenever developer release any update you can get it.

Usually People buy expensive android phones to play games and music and problem comes when storage space get full so people have to store all their music games and photos in their PC’s this is big inconvenience for Android Phone users but don’t worry someone saw this and decided to come up with a simple hack that enables one to stream their music from their PC to their smartphones by using Wi-Fi. There is an Android app called app called Gmote.

There have been some simple yet highly effective hacks. For example, there is an Android app called OpenSeMe that makes it very easy to enable your Android phone to open your garage door This Android app has some simple features that make it safe and easy to use.

One of the common complaints about Android phones is that it does not allow users to take screen shots. However, some clever Android developers have made this possible by creating some interesting Android apps that enable you to take amazing screenshots of your Android phone, albeit with some fancy effects.


5.Block Ads From Any App

Many free Android apps you will be using will be running ads, and one of the ways of getting rid of these Android apps is to use paid versions of these apps. However, after you have rooted your Android based phone, you can install the Adfree app that essentially blocks ads from everywhere on your Phone.

6.Improve Sound Of Your Phone

While many Android devices come with incredible audio quality, some phones have terrible audio quality. If you’re looking to improve the audio quality and loudness through your phone’s speaker and headphones, then you can try out the Equalizer app from the Google Play Store.

in android devices there is also quality to record screen and record calls at any time That being said, the Google Store has a solution for this and you can find various call recording apps and screen recording apps.

In some countries, YouTube and several other websites are banned. On a PC, you can easily unblock these websites using VPN apps.You can do the same on Android. Hotspot Shield is one of the most popular VPN apps available on the Google Play Store and you can use it to unblock your favorite websites.
There are much more functionalities which you can easily use on Android Devices.
Share

While selling your Android device may seem like a no-brainer, there are actually quite a few …